COVID-19 Updates Please follow the link below for information regarding City of Pasadena COVID-19 updates. Read on... 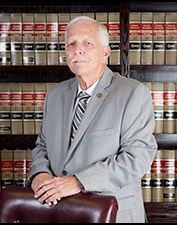 Councilman Bruce Leamon was born in Bartlesville, Oklahoma and has called Pasadena his home since the age of five. He was educated in the Pasadena school system and is a graduate of Pasadena High School. He is retired from Air Products and Chemicals in Pasadena where he worked as a supervisor. He has been married to his wife Sylvia for 43 years and has two sons, Nick and Aaron.

Councilman Leamon has been involved in numerous community service and volunteer organizations such as:

He strongly supports Pasadena public safety efforts through the Pasadena Police Department and the Pasadena Volunteer Fire Department. His experience as a former Pasadena firefighter has given him a unique perspective of the exceptional sacrifices our public safety employees are called on to make. He knows a strong public safety presence is essential to Pasadena's continued reputation as a safe place to live, work and raise a family.

Councilman Leamon has also taken an active interest in civic service through his involvement as a member of the Pasadena Fair Housing Committee, the Pasadena Crime Control and Prevention District Board and the Queens Neighborhood Association board.

Speaking about improvements made in his district, Councilman Leamon says:

“Residents in District B expressed a strong interest in maintaining our district’s infrastructure as well as the walkability of our neighborhoods. I’m pleased that capital improvement funds have provided water and sewer line replacement throughout our district as well as putting in place over 9,000 linear feet of new sidewalks for residents to enjoy.

We want to encourage pride in District B’s neighborhoods and help make them family friendly. That’s why I worked with the City’s Code Enforcement team to clean up lots that were overgrown with weeds and to remove junk vehicles from the area. We’ve also assisted by increasing the number of leash law signs in our district to remind dog owners not to let their pets run loose. That will help make our neighborhoods safer to walk and play in.”

Councilman Leamon will be working to ensure the public infrastructure, park system and recreational facilities that Pasadenans currently enjoy are maintained and expanded where appropriate. He feels these are the issues, along with public safety, that most directly impact Pasadena residents on a day-to-day basis.